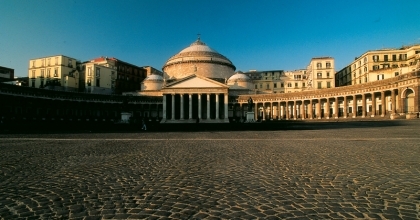 Naples is a city full of life that for about three millennia has become a special and important capital for Mediterranean culture. It is world famous for its artistic contribution, natural beauty and long history. According to the ancient Greeks and Romans, the origin of Naples is connected to the legend of the beautiful goddess Parthenope. The city is still full of monuments from those ancient times. This former regal diva has three royal palaces, a superlative archaeological museum, art collections spanning from the classics to Jeff Koons, and an ancient centro storico bursting with secret frescoed chapels and citrus-filled cloisters.Here, restaurants are family heirlooms. Matching other global centres, Neopolitans can boast worldclass design, trendy bars and cool clubs. Here though, the cutting edge lives side by side with the Naples of neorealist film director Vittorio de Sica’s imagination. But like the city’s native thin-crust pizzas, there is more beneath the surface.Furthermore, Naples lies at the heart of the Campania region’s aerospace and astronautics sector and has been since the 1930s. Of recent company licences issued, according to statistics from the European Patent Office, 55% were in the field of high technology, and the city has about 100 enterprises dedicated to the aeronautics sector. Naples is a major cargo terminal, and the port of Naples is one of the Mediterranean’s biggest and most important.In Naples you can find important research centres, two worldclass universities and faculties of aerospace engineering, a science park, dedicated technological districts and the Italian Space Agency, ASI. The ability to innovate, cooperate and network have been the key to the economic success of the area which is still growing faster than the Italian national average – about 8% per year. Naples – truly a city of the past looking strongly to the future.